Patsy Ramsey has become everyone's favorite Patsy, even in death. Virtually everyone skeptical of the intruder theory assumes that Patsy, at the very least, penned the ransom note, and many are convinced she is the one who killed her daughter (in a rage over bedwetting, or JonBenet's refusal to participate in more pageants, or perhaps while taking a swing at John, the blow landing on JonBenet instead), following that brutal act with an "over the top" coverup, involving ligature strangulation and vaginal penetration, with a paintbrush handle, no less, topped off with "the War and Peace of ransom notes." Calm down, folks. It's theories like these that are over the top, patently so. There is in fact no evidence whatsoever linking Patsy Ramsey to either the crime or the coverup.

But but but what about the fact that the note was written on Patsy's very own pad, that the "garotte" was fashioned from her very own paintbrush handle, that her fibers were found "all over" the crime scene, that she was wearing the same outfit the following day, etc., etc.
As I see it, most of the above is evidence of innocence, not guilt. Why would someone going to such trouble to point away from herself, point at the same time toward herself by using her own pad and her own paintbrush? Why not choose materials belonging to JonBenet or Burke or John? If Patsy had been up all night carefully staging an elaborate coverup, why would she fail to shower and change the next morning, prior to calling the police? If the Ramseys were in on this together, they'd have had plenty of time to prepare for police involvement. There was no law stating that a kidnap had to be reported prior to 6AM. She'd have had plenty of time to shower and change, no rush. And if Patsy did it on her own, then why would John have testified that she was asleep in bed when he got up and took his shower? Note, by the way, that it was John, not Patsy, who took the trouble to shower and change.

As for the fiber evidence, fiber evidence is meaningful when fibers can be traced to a source outside the home. Fibers from someone living in the home can almost always be explained in an innocent fashion and can only rarely constitute evidence. Patsy's fibers must have been all over JonBenet, since Patsy was her mother and was no doubt fussing over her, hugging her, kissing her, etc. all day. When JonBenet's body was taken upstairs, Patsy reportedly embraced it, sobbing uncontrollably. She's been accused of deliberately "contaminating" the crime scene, but you can't have it both ways. If the body was "contaminated" by Patsy, that would also explain how her fibers got there. And don't forget, the duct tape had been pulled off of JonBenet's mouth by John, so her fibers could easily have got on the sticky side of the tape at that time.

Which leaves Patsy's fibers found in her paintbox still in the basement, which for some are proof positive of her involvement in the crime, because Patsy herself denied wearing that particular sweater while painting. Gosh, I wonder why she'd deny that if she were involved in covering the murder of her child. It would have been awfully easy to tell the police, yes, she often painted while wearing that very sweater. But it looks as though she told the truth. Hmmmm.

To put the Patsy dunnits out of their agony, I will now explain how her fibers got into the paintbox. Because they were already all over JonBenet and JonBenet could easily have fallen on that box or been shoved against it while she was being strangled. End of story.

Well, what about the handwriting evidence? Haven't a whole raft of experts insisted she must have written it? If you've been following this blog, you've already gotten a pretty good idea what I think of these "experts." It seems clear that, once John was "ruled out," then that left Patsy and only Patsy, at least as far as the intruder skeptics were concerned. If it was an inside job (it was) and John had been ruled out, then the note MUST have been written by Patsy.

Funny thing, once you're convinced of something, then you start seeing evidence of it everywhere. Here's an example of what two of these "experts," Cina Wong and David Liebman, had to say regarding margins.

“There,” he said. “The handwriting loosens up on the third page. That’s when the tendencies come out…. Look at the margin, how it slowly pulls to the left.”

That’s a characteristic that the samples and the note share, he said.

“It’s kind of like a fingerprint,” Wong explained. “You and I may have the same little bump here, but do you have all these here, here, here?” She pointed to different parts of her finger. “You can’t ID somebody from your nose alone. It’s a cluster of deviations.”

Only problem is: the margins on the ransom note do not pull to either the left or the right. Patsy's tend to pull left, yes, and the effect is very pronounced, unmistakable. Here's an example: 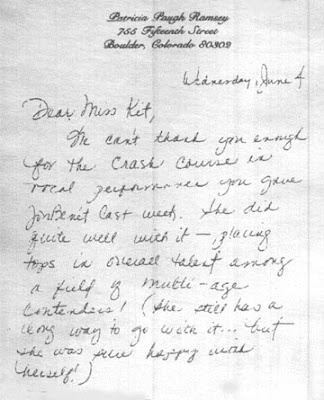 The margins of the "ransom" note do not pull left, they are almost perfectly rectilinear. Check the copy of the first page provided on the following website, an article about Cina Wong, Handwriting expert says author stole her JonBenet Ramsey work. See how the left margin pulls to the left? Look again. It's a crooked xerox, as should be obvious from the slanted guidelines. The original sticks closely to the printed margin. These "experts" were so totally incompetent they couldn't tell the difference between a crooked xerox and margin drift. They saw what they wanted to see, and this in my opinion is what all the rest, each in their own way, did.


accused Patsy Ramsey of changing her handwriting after the murder. "In the ransom note, almost exclusively the lowercase manuscript a was used, I think, 98 percent of the time," he said. "What was telling was that after the Ramseys were given a copy of the ransom note, the lowercase manuscript a almost disappeared entirely from Patsy's post-homicide writing. Writing samples from Ramseys' personal letters and notes she wrote before the killing contain 732 manuscript a's that look like the lowercase typewritten a, but they are written by hand. She switched to a cursive a after the murder." (from this article)

(NB: "manuscript a" is written with a little head on top, as in the printed form. Cursive a lacks that head.)

This is misleading. Here we see several examples of cursive a, obviously written prior to the murder. The same false accusation appears in Kolar's new book. 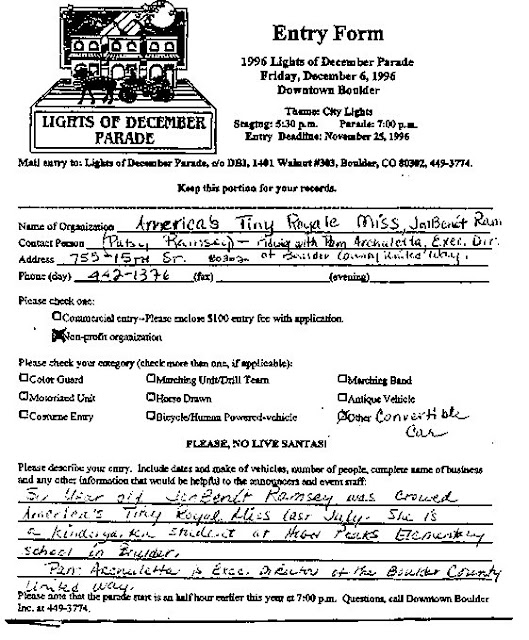 Here we see a combination of cursive and manuscript "a"s, in a document obviously penned after JonBenet's murder. Nine manuscript "a"s appear in this very brief text. Clearly Patsy was not making an effort to avoid using that letter form.  Steve Thomas's accusation is, very simply: wrong.]

Obviously I can't get into every single report and deal with every single misleading or incorrect observation, but it should be clear that handwriting "experts" and detectives, just like the rest of us, see what they want to see or what they expect to see. Since so many expected to find similarities between Patsy's writing and the note, that's exactly what they found.

Bottom line: Patsy is the one who called 911 so early in the morning. So what difference does it make if she was wearing the same outfit as the night before, or whether her margins drift to the left or she used or didn't use manuscript a after the murder? If she had written the note, if she were in any way involved in the murder or the staging, she would not have made that call. And if you need more convincing, just listen to the panic in her voice in the recording of that call. Forget about trying to hear Burke or John or listening to what it might say when played backwards. Just listen to how upset she sounds, how intensely she is hyperventilating and ask yourself how easy it would be to fake that. Sorry, folks, Patsy had nothing to do with either the murder or the coverup.

Which is not to say she always told the gospel truth. More on that one next time.