It occurred to me some time ago that the "ransom" note may have been originally typed on a word processor and then traced or copied onto the note pad. It would have made it easier to compose the note in the first place, without having to constantly cross words out to make corrections. (There are only a very few corrections in the final copy.) More importantly, this would also have been a very clever way for the writer to disguise his hand. I fiddled with various fonts and settings and got some interesting results, but nothing that fit exactly.

This morning I decided to give it one more try. Assuming the experts were comparing specific characteristics pertaining to lettering and spacing, then a document copied from a computer font might well have fooled them. I went back to the drawing board and lo and behold, it didn't take all that much time for me to find what looks to me like a pretty good match. After a few trials and errors using Microsoft Word, I hit on the following format: Courier New, font size 11, with a left margin of .5 and a right margin of 4.7. Typing the first paragraph of the note with this setting automatically produces a line by line layout identical to that of the original (I didn't use the Enter key at any time). This even includes use of the Tab key on the first line. I consistently left two spaces after each period, except for line 7, which required a single space after "posession." in order to fit.

I then tried different scalings of the original note until I got one that more or less corresponded to  what I had typed. And lo and behold, when I placed each line of the original below my typed copy, there was a remarkable similarity, of both letter form and spacing. (NB: the spacing between the words in the original note is unusually wide, but corresponds quite well, generally, with that of the Courier New font.) I altered nothing in either the typed copy or the original. The only thing I changed was the scaling, so the two would be comparable.

Here's what I came up with: 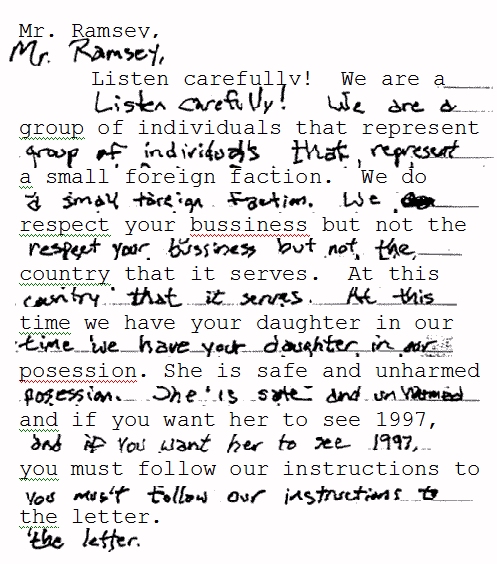 I haven't yet experimented with the rest of the note, but what I came up with so far is so interesting I thought I'd share it now. Even if the rest doesn't line up quite so well as the beginning, I still think this could represent a significant new piece of evidence. There is certainly a very close correspondence between the design of the font and the formation of the letters in the note.

[Added 8-4-12: After continuing my comparison I discovered that the similarities of both format and word spacing continue on lines 11 through 15 but from line 16 on the correspondence breaks down. Interestingly this is the case with both the line by line and word by word formatting.]

Regardless of what the authorities might think of this particular bit of sleuthing, I feel very strongly that in order for this investigation to go forward, the original group of handwriting examiners should be questioned, separately of course, on the following issues:

1.  What was your original conclusion regarding your comparison of John Ramsey's exemplars with the writing on the note?

2. Did you conclude initially that he could not have written it, or was your conclusion based on what another examiner said? Was there any dispute regarding this among the various examiners?

3. Did you feel any pressure to agree with the others so there would be a 100% consensus?

4. On what basis was your decision made? What standards of questioned document analysis enable an examiner to conclude with confidence that a particular person could not have written a document such as the Ramsey "ransom" note? Are your conclusions based principally on resemblance? How do you take into account the possibility of deception (such as for example the use of a computer font as a model)?

5. Was the legal statement of John Ramsey's I presented earlier on this blog, which is also analyzed on Fausto Brugnatelli's blog, one of the exemplars you examined? If not, are you aware of it?

6. What do you make of the comparison I've provided here, that suggests the writer might have imitated or traced a computer font? If that were indeed the case, would it have a bearing on your decision to rule John out?