Now to continue with the next fantastic theory, a perennial favorite entitled:

Christmas comes and goes. The Ramseys return from a party at the White's, deliver some packages, go home and go to sleep. At some point during the night, JonBenet wets her bed. For some reason Patsy wakes up, discovers the wet bed and flies into one of those rages so typical of so many women who fly into rages over the bedwetting of their children. This has been documented so we know it can happen.  One thing leads to another and at some point Patsy cracks. Reaching for a handy Maglite flashlight that just happens to be nearby, she smashes her daughter over the head with a tremendous blow, a blow so powerful it's been described as capable of felling a full sized man.

Realizing what she's done, and in a total panic, she decides to cover up the murder of her child by staging a fake kidnapping. No wait, why not stage a crazed pedophile intruder, who attacks the girl sexually and then strangles her? Patsy, ever the drama queen, goes "over the top," deciding to combine both scenarios. After carrying her daughter's body down to the basement, she reaches into her trusty paint tote, breaks the tip off one of the paint brush handles, and jams it into her daughter's vagina. This may seem like a strange thing to do, but again hysterical women have been known to do exactly this sort of thing. It's documented, apparently, but I have no idea where.

Then, to make the pedophile attack even more convincing, she takes the rest of the brush handle and constructs a "garotte," using a knot she's learned in one of her macrame classes. She's very proud of what she's learned so goes to some trouble to make a really nice looking, elegant knot: 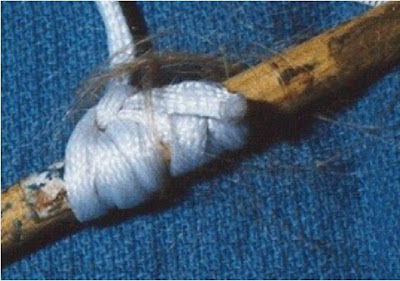 She then proceeds to strangle her daughter by systematically tightening the handle while the cord is around her victim's neck. It's a gruesome sight,

[I decided to remove this image at the request of a reader who found it disturbing and was concerned about others also being upset by it. I agree.]

but Patsy takes comfort in the fact that no one could possibly in a million years believe someone like her could do something so utterly depraved simply to cover up what could have been reported as an accident.

There are still several more things to be done. Recalling a biblical passage from Psalm 118, containing the phrase "bind the sacrifice with cords," she decides to bind her daughter with cords, because after all she is a very religious person and this particular psalm has special meaning for her. She also finds some duct tape and places it over her daughter's mouth, to complete her staging of the attack. Little does she realize that fibers from her red sweater are now entwined in the knot of the "garotte," with four additional fibers attached to the gummy side of the tape. This it is that will ultimately give her away, because as is well known, fibers of this sort can never be transmitted indirectly, it's a strict rule in the game of Clue.

So far so good. She has successfully staged a pedophile attack. Now to stage the kidnapping. But for that she'll need to write a phoney ransom note. What a great opportunity, since she studied journalism and can therefore use this as a chance to show her stuff. No two or three sentence note for her, oh no. Patsy always goes over the top, and this is her chance to shine, so she decides to write the "War and Peace" of ransom notes, a full 2 1/2 pager.

Using her own notepad and her own pen, because she feels more comfortable using items that belong to her, she addresses the note to John and takes the opportunity to tell him the kidnappers "do not really like" him, because this note is not only a part of the staging it is also a personal message to her husband, who sometimes ticks her off. She gets stuck for a moment on the ransom amount, not knowing how much to ask for, but then remembers her favorite psalm, number 118. Well, $118 seems too little, so how about $118,000? That seems right, so that's what she asks for. She realizes of course that she will have to disguise her handwriting but soon forgets in the heat of inspiration. This is her biggest mistake, not making any effort to disguise her writing, so even the most incompetent and unprofessional "experts" will have no trouble convincing themselves she wrote it.

She also decides to use some of her own favorite expressions, such as "two gentlemen" and "use that good southern common sense," because after all she wants John to realize the note was written by her, otherwise what would be the point?  When the note has been completed, she places the three sheets near the bottom of the staircase she usually uses to get to the kitchen in the morning. Realizing no one is going to believe her victim has been kidnapped with the body in full view, she decides to hide it away in a remote, little used basement room.

Then she goes upstairs and gets into bed, still wearing the same outfit because, well, it's just too much trouble to change and she is tired. Soon John wakes up, showers, notices she's still in bed, but for some reason fails to notice that she's fully dressed. A bit later, Patsy gets up, brushes off the outfit in which she recently clubbed,  sexually assaulted and strangled her bleeding daughter, and completes her staging by going downstairs, "discovering" her note, crying for John, who at this point suspects nothing, and then, using every ounce of her considerable theatrical talent, feigns hysteria while calling 911. No sooner has she done this then she realizes her mistake. With the body still in the house and the police called in so soon, her kidnap staging is doomed to failure. Well, no matter, because if they don't buy the kidnapping, they'll certainly buy the pedophile attack, no need to worry.

Submitted for your approval: a woman with no past history of ever even striking or spanking either of her children decides one fine day to murder her daughter over a bedwetting incident, subsequently covering what could have been reported as an accident by staging an elaborate pedophile attack, complete with vaginal penetration and "garotte" strangulation, and then writing a 2 1/2 page ransom note not bothering to disguise her hand, and then calling the police while her victim's body is still in the house, thus negating the effect of her carefully crafted note. When her husband finds out what she's done he decides to assist her in the coverup. Dah dah dah dah dah dah. Welcome once again to: The Twilight Zone.

Only this is not the Twilight Zone, but the murder of JonBenet Ramsey as seen by detective Steve Thomas, whose book, JonBenet: Inside the Ramsey Murder Investigation, has convinced many thousands of case followers that there is only one possible solution to this crime: Patsy Dunnit.
Posted by DocG at 11:46 AM