The Gospel According to Michael Tracey and David Mills

Well, finally I was able to view the recent A & E show, The Killing of JonBenet: The Truth Uncovered, produced by the same person who produced the first A & E "Documentary," David Mills, with his former co-producer, Michael Tracey, serving as consultant. It's now available, on a pay-per-view basis (not much), via youtube. (What would we do without youtube? I'm almost tempted to refer to it as Saint youtube.)


My overall response is similar to my response to the Woodward book -- not surprising since Woodward obviously played a key role in its development, and appears several times: some new information, but mostly old stuff; extremely biased in favor of the standard Ramsey gospel, with a heavy dose of Lou Smit; often wrong, and highly misleading. As with the Woodward book, the Boulder Police are portrayed as the villains of the case, stubbornly adhering to their original prejudices despite a "mountain of evidence" proclaiming Ramsey innocence to the heavens. What's new are some  questionable "expert" opinions on matters ranging from the markings on JonBenet's neck, to signs of prior abuse, to the meaning of the touch DNA evidence.

What interests me particularly is a brief shot of Patsy proclaiming for the world to hear that the 911 call was her idea. I'd seen a longer version of that same shot in the first A&E doc., but when that became unavailable I was afraid it had been lost forever. Thanks to a tip from someone commenting here I was on the lookout for it in this new production. And, finally, I found it:

In the first documentary, she continues, adding the all important line:

"And I think he ran to check on Burke. And I ran downstairs and, you know, dialed 911."

As I've already pointed out, this version of what happened, uttered with John sitting right next to her, totally contradicts the version we've heard so often from John, that he told Patsy to make that call. And it's completely different from the version in their book, where he's down on his hands and knees, reading the note, while Patsy is right next to him, lifting the receiver to call 911.

Much is made of the reddish marks on JonBenet's neck, which the A&E "experts" insist on seeing as scratch marks, defensive wounds proving she was alive when being strangled with the "garrote." But there is no mention of scratches or defensive wounds in the autopsy, where the marks are described as petechial hemorrhages, something completely different. Close examination of the marks shows that they are not, in fact, crescent shaped nail marks, but shapeless blotches: 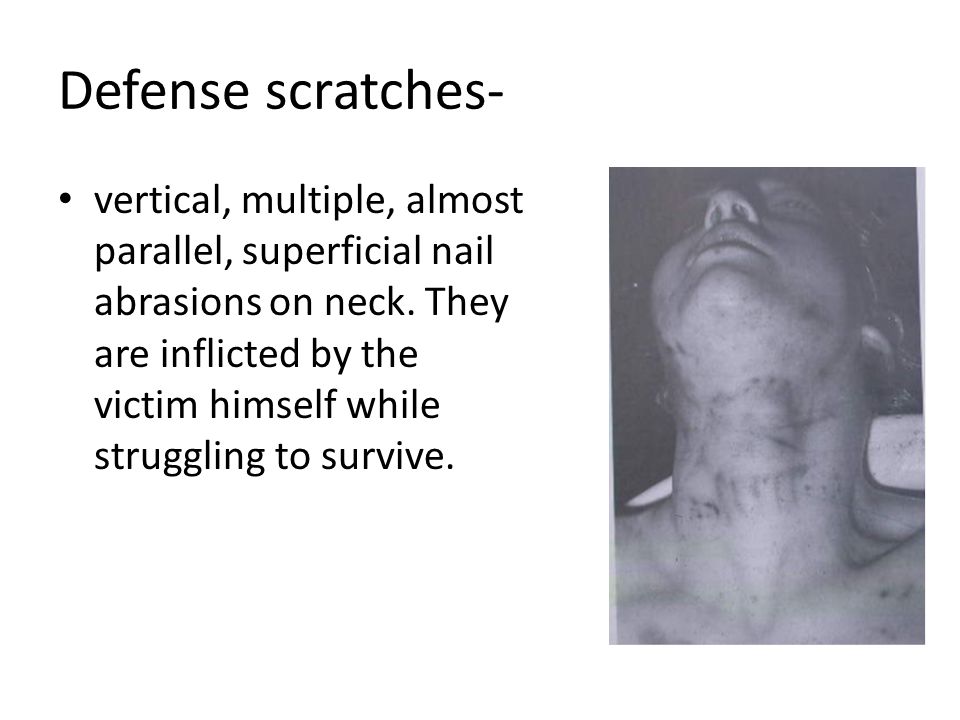 Sorry to include such disturbing images, but this is an important point. In the opinion of the majority of forensic pathologists who reviewed the autopsy and accompanying photos, the head blow came first, followed by strangulation at least 45 minutes later, after the victim had been rendered unconscious. This is consistent with the strands of her hair found entwined in the cording of the "garrote," because it was clearly made while her attacker was right on top of her -- and if she'd been struggling, it would have been all but impossible to tie that knot as neatly as we see it in the photos. It's also consistent with the fact that no skin cells were found under the victim's nails. The DNA retrieved from her nails seems to have originated from  a contaminated nail clipper. These findings are extremely important because, first, they contradict Lou Smit's claim that she was tortured mercilessly and strangled while fully conscious, and secondly, they make it all but impossible to believe that an intruder would hang around for at least 45 minutes to strangle his victim after knocking her unconscious.

As far as signs of prior sexual abuse, they manage to find some "experts" who come up with innocent explanations for the signs of chronic vaginal abrasion found during the autopsy. But as we've learned from CC's guest post last week, a panel of pediatric specialists were convened by LE, and their opinion was unanimous: those injuries could ONLY have been produced by prior sexual abuse.

More experts are consulted regarding the DNA evidence, but no amount of "expert testimony" can eliminate the very real possibility of indirect transfer, a known issue with touch DNA especially, since it is so extremely sensitive to even old skin cell deposits. I deal with this issue in some blog posts here (do a search on "DNA") and in an appendix of my book devoted to the problems associated with this new technology. For me the bottom line is: an intruder without gloves would have left his DNA all over the place and someone wearing gloves would not have left any touch DNA at all.

As for Lou Smit's take on this case, I find it unfortunate that someone with his reputation would allow himself to become an advocate rather than an objective investigator. I can see how he might have felt some sympathy for John and Patsy, but there was no excuse for his bending the evidence in the manner he did, to produce so many misleading theories. My take on his efforts can be found in a blog post titled "The Lou Smit Show," which debunks just about every one of the claims parroted by Mills and Co.
Posted by DocG at 2:37 PM