[Point of interest. I was recently contacted by an author offering her e-book on the Ramsey case as a "free book giveaway" this week only. The book is called "Little Girl Blu: The JonBenet Inside Circle Theory"  and it can be downloaded from this website: https://www.amazon.com/Little-JonBenet-Inside-Circle-Theory-ebook/dp/B0149IE9M8/ref=sr_1_1?ie=UTF8&qid=1473648813&sr=8-1&keywords=sweetie+bee ]

Burke will be interviewed by Dr. Phil at 3PM Monday on CBS. First of a series.

Thanks to the A&E trailer (I don't have cable, so was unable to access the show itself), we have a brief but tantalizing glimpse of John (I'm assuming it's John) writing on a lined notepad, which (finally) gives us a chance to see some examples of his "official" writing style -- assuming that's what we see in that shot. The use of "artfully" superimposed images makes things a bit challenging, but I was able to do a couple screen captures that might prove helpful.


Before getting to this new stuff, however, I'd like to share an older, more easily authenticated exemplar found online not too long ago by a contributor to this blog: a brief thank you note addressed, apparently, to Mike and Pam Archuleta. It suddenly materialized on an internet forum, where it was attributed to Patsy by people who tend to attribute everything to Patsy, and then wonder why her handwriting changes so much. 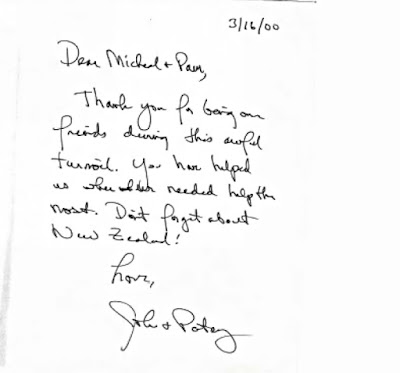 My blog informant thought it was probably penned by John and I agree. Why do I feel sure John wrote it? Compare the signature with the one we see below, on the left:

Note the loopy captial "J," the loopy "h" and the loopy capital "R" just above, and compare with the similarly loopy J's and h's in the signature on the note, plus the loopy "P," so much like the loopy "R" in John's signature. There's a lot of loopiness in the note generally, as in both signatures, and the resemblance is striking. One more very interesting similarity: both the note and the signatures are characterized by back slant. Hmmmm.

Now let's have a look at one of my screen captures from the A&E trailer:

What you're seeing is a detail, with enhanced contrast to make reading, and evaluation, easier. On the top line I think I see something like: "testing that is desirable, but expensive." On the next line: "I imagine a lot(???) has confused the police." Next line begins: "Must have been when  . . " but I can't make out the rest.

Looks like the back slant is gone. I see some loopiness, but not as prominently as in the Archuleta note. Is this really John's hand, or was it penned by someone else? Hard to say for sure, as there are no obvious similarities. One thing I've noticed is the loop on the letter "d" in "desirable" and a somewhat similar loop on the "p" in "police." Those loops are similar to loops on the "d"s in the thank you note as well as the "p"s in "helped" and "help."

Here's another screen capture from the same source, an enhanced detail that's been realigned on the page to make it more readable: 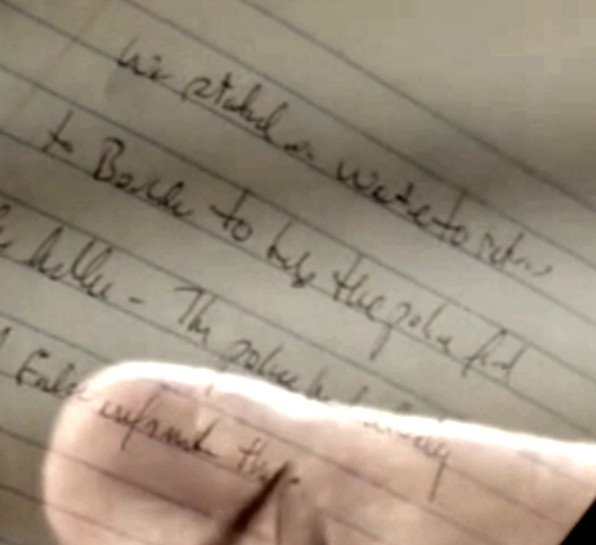 So! Finally we get a chance to see the sort of thing that, in all likelihood, the handwriting "experts" saw when John provided them with his exemplars. (Even if the A&E writing isn't authentic, I feel sure the thank you note is.) And clearly, it's radically different from anything in the ransom note. I suppose you can't blame them for ruling him out (though imo it was a huge mistake regardless). Of course it's important to keep in mind that all the above samples are written, for the most part, in cursive.

The only available example of John's printing is, of course, the legal document we've all seen many times before.

Looks completely different doesn't it? A lot more like the ransom note, I'd say. But I seriously doubt it was among the exemplars offered to the "experts" who ruled him out.

So! One might well want to ask: is this really John's writing, or was it penned by someone else? Here's my take:

1. A digital copy of this document was shown by me to Patsy's sister Pam during an internet chat session hosted by long-time Ramsey supporter, Jameson. Her reaction: "Yes, that's John's chicken scratch all right." Jameson was alarmed and attempted to explain it away, but I heard it loud and clear. And Jameson, who could be a pain in the butt, but is also honest, has since confirmed it publicly.

2. I attached a copy to an email sent to John's lawyer, Lin Wood, asking him to either confirm or deny it's authenticity. No response. I tried again. Again, no response.

3. In all the years this document has been available on the Internet, no one in a position to know has ever questioned its authenticity.

4. Though it's different in many ways from the samples we see above, there are certain similarities that can't be ignored. The back slant, for one thing. Note also the loops on the "d"s in "completed," "notified," and "pleased," very similar to the loops seen in the other exemplars.

If this document was in fact penned by John, and I see no reason to assume it was not -- then the difference between the two very different styles evident from examining the exemplars seen above, needs to be explained. One style looks nothing like the note and was probably the sort of thing presented to the authorities. The other bears many resemblances to the note and was probably never seen by the authorities. Will we ever get an explanation? I wonder.