The key to the JonBenet Ramsey case has always been that puzzling "ransom" note. And in the minds of just about everyone following the case, it's a matter of either/or. EITHER the note was written by some crazed, but elusive, intruder OR it was written by Patsy Ramsey. Clearly no other alternative is possible. Burke, at the age of nine, was far too young to have written it. And John was "ruled out" by some of the leading experts in the field of document analysis. So he couldn't have written it.

Strange situation, no? Almost everyone in law enforcement who's studied the case, plus, I would imagine, the great majority of the public following the case via the many books and, of course, the Internet, doesn't take the intruder theory seriously. And well they shouldn't. Not only was there no sign of a forced breakin, no footprints seen in the thin layer of frost crusting the lawn, no sign of tracked in moisture or mud seen in the basement, no unsourced fingerprints, nothing missing from the house -- but also no reason for any kidnapper to wait to write his ransom note until after he'd entered the house, no reason for him to make it so long and detailed, no reason for him to leave that note without actually taking his victim, no reason for him to redress the body in fresh underpants, no reason for him to hide it in the most remote place in the house, no reason to wrap it in a blanket "like a papoose" (John's description of how he found it). And as for the DNA "evidence," an intruder not wearing gloves would have left his DNA all over the place, while an intruder with gloves would not have left any "touch" DNA anywhere. The DNA is almost certainly an artifact, the result of indirect transfer from some innocent source.

Which tells us . . . what? Why it's as simple as adding two plus two: the note could only have been written by Patsy Ramsey. No-brainer, right?

Well, actually: wrong. Because, as I've demonstrated over and over on this blog, Patsy's involvement in either the murder or the coverup makes no sense. The most obvious example of that is the fact that she is the one who called the police first thing in the morning. If she is the one who wrote the note, then: knowing the body of the victim is still in the house, meaning there was no kidnapping; knowing that her handwriting will eventually be examined by experts; knowing that the investigators will eventually realize that the note was written on a writing pad from her own house; why oh why would she be so stupid as to place a noose over her own neck by inviting the police over before getting the body -- AND the note -- out of the house? Why, in fact, leave a patently phoney "ransom" note at all?

Of course, the illogic of the intruder theory has had no affect at all on those defending "the Ramseys," just as the illogic of Patsy's involvement has had no effect on those insisting on "Ramsey guilt." You are either on one side or the other. Which means that attempting to defend Patsy has, for so many years, been tantamount to embracing the intruder theory. Thus it was that experienced law enforcement veterans, such as Steve Thomas and, more recently, James Kolar, have written books based on the proposition that Patsy and only Patsy could have written the note. As both make clear, there could not have been an intruder, "and hence" the only logical alternative for writer of the note is Patsy. New York lawyer, Darnay Hoffman felt confident she must have written it, and hired a group of dubious "experts" to prove him right. Which they did, of course. Why not, since the note could only have been written by her, there was no other possibility.

And as far as the public was concerned, as various examples of Patsy's writing were released, via the tabloids, it became evident to many that the resemblances with the "ransom" note were obvious. You didn't need "experts," you could see it with your own eyes.

Meanwhile, the one person in the house that night most likely to have inflicted the vaginal wounds, both acute and chronic; the one person with a conceivable motive for murder (the need to silence a victim of incestuous abuse); the individual known to have withheld significant evidence regarding the open basement window; the individual who obviously lied about breaking that window earlier to deflect from the clear evidence of staging; the individual who shamelessly hired his own team to "investigate" the murder, including his own set of handwriting "experts" whose mandate was clearly to exonerate him; the individual whose legal team stonewalled the investigators for months, refusing to permit a police interview . . . The one person most likely to have committed this crime and who was, in fact, the leading suspect at the outset, this person was, amazingly, off the charts. Untouchable. Handed a "Get Out of Jail Free" card. Steve Thomas went so far as to give him "a pass." How generous!

All because a group of "experts" ruled him out. I've challenged that ruling on this blog, here and also here. Thanks to that ruling, by the way, not one single example of any of the the handwriting samples provided to the officials by John has ever been made public. The tabloids had a field day with Patsy's samples, but thanks to the all abiding faith in those "experts" no one seems to have been interested in anything written by John Ramsey. The one exception, the one sample we have from John is from a different source entirely. It's a legal document, provided to one of the tabloids by, no doubt, the individual at the other end of the lawsuit in question.

Thanks to this lawsuit, it's been possible to compare John's writing to that of the ransom note, and, lo and behold, the similarities are remarkable. I won't post them here, but if you're curious, you can find two sets of rather striking comparisons on this post. So why was John ruled out????

As far as Patsy is concerned, I've already examined with some care the laughably incompetent reports offered by Darnay Hoffman's "experts." To learn just how hard they worked to base their case on little more than cherry picking, see the series of posts titled "The Experts See Patsy" (you can do a search on this title using the search mechanism at the upper right). I've also posted direct comparisons between the note and Patsy's left-hand sample, and also her London letter.

After close examination of all available samples by Patsy, I felt I had no choice but to declare, to the consternation of those many Patsy "fans" out there, that there is no resemblance whatsoever between her writing and that of the ransom note. I believe I've demonstrated that quite clearly, but for some strange reason there are still some doubters out there, those who claim they can "see with their own eyes" that Patsy wrote the note. So I decided to put together one more display, this time comparing chunks of Patsy's writing with a paragraph from the note, plus the one sample we have of John's writing, plus one additional sample of some anonymous hand, for comparison sake (to get a closer look, right-click and select "Open Link in New Tab"): 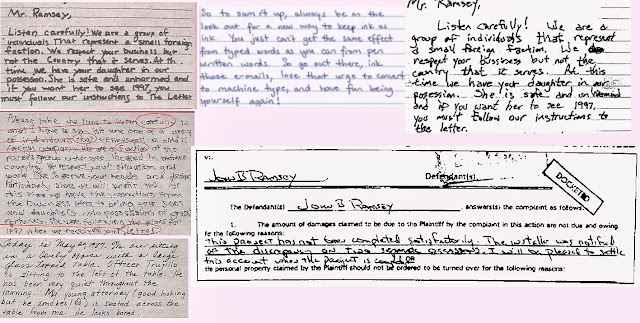 An excerpt from Patsy's right-handed rendition of the note is on the upper left, with her left-handed sample just below it, and a sample of her writing provided to the investigators just below that (note by the way that she was so flustered she got the date wrong). On the upper right we see the first paragraph of the ransom note, with John's sample just below it. To the left of the ransom note excerpt I've added a sample from an anonymous source I found on the internet. This one interests me especially because, of its resemblance to Patsy's hand, as seen in her right hand version of the note, the other right hand sample at the bottom left, and also her London letter. None of Patsy's samples bear much resemblance at all to the ransom note, as far as I can see. But you are all free to judge for yourselves. To my eyes, John's sample looks far more like the note than does Patsy's, which makes you wonder why he was ruled out. But again, everyone is entitled to his or her own opinion -- especially when that opinion is based on an actual examination of the facts at hand, rather than an inner conviction of what has to be the case based on a false dichotomy.

As I see it, there is no either/or as far as the Ramsey case is concerned. There is a third possibility that must be considered. The one who was "ruled out" must be ruled back IN.