Here, once again, is the sole example of John Ramsey's handwriting that's ever been made public, what looks like a copy of a legal deposition. (Click on it to enlarge): 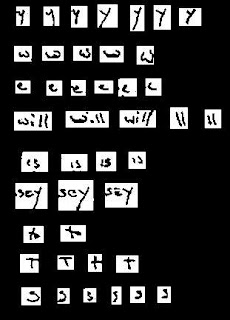 I challenged people on some of the JonBenet forums to sort John's exemplars from those in the note, but no one ever came up with the correct solution. If you study John's deposition carefully, you should be able to solve it, but it won't be easy.

To compare Patsy's hand with that of John and the note writer, I added some of her exemplars to the above display. They're on the right hand side of every line but line 4:

Looks to me as though her exemplars are notably different from the others, but I'll leave that to you to judge.

As I mentioned in an earlier post, the Italian handwriting examiner Fausto Brugnatelli posted a somewhat similar set of comparisons. I became aware of his website only after I had done some of my own comparisons from the same document. Here is the link to his website, still up after all those years. The Brugnatelli site also contains a copy of the "ransom" note, for those of you interested in making a detailed comparison of your own. [Added 10-10-13: Brugnatelli's website has moved. His comparisons can now be found here. (John's exemplars are on the left.)]

Before concluding, I want to make it clear that I do not believe it possible to identify John as writer of the note simply on the basis of similarities of this sort. Nor does Brugnatelli make any such claim. Just because two sets of writing are similar, that does not tell us they have to have been written by the same person. In fact I seriously doubt that it's possible to point the finger at anyone solely on the basis of a handwriting comparison, as so many have attempted to do with Patsy.

The point I'm making in putting these comparisons together is not that this is proof John wrote the note, but strong evidence telling us it was a huge mistake to rule him out. While the striking similarities documented here can't prove he wrote it, there is no way they can be dismissed as irrelevant, which is what the so-call "experts" (some of them appointed by John himself) decided to do.