The Moving Finger writes;
and, having writ, Moves on:
nor all your Piety nor Wit
Shall lure it back to cancel half a Line,
Nor all your Tears wash out a Word of it

There's a file I've had for some time without knowing quite what to do with it. It's a .gif file, titled "writing sample via Jameson." For the life of me I can't recall exactly where or when I got it, but it has to have been several years ago. Possibly it's something Jameson posted on her Webbsleuths forum, after much prodding from me, because she'd let it be known she had samples of John Ramsey's writing, but was refusing to share them. I was never sure what to do with it because of its slightly ragged appearance, probably the result of a poor quality xerox. If you right click on it and select "Open Link in New Tab," and then click on it again, you'll get a better look:

Finally, today, I decided it was just too good a piece of evidence to leave sitting around. And I realized I could compensate for the ragged look by smoothing it out a bit on my favorite Paint program (an old copy of Paint Shop Pro): 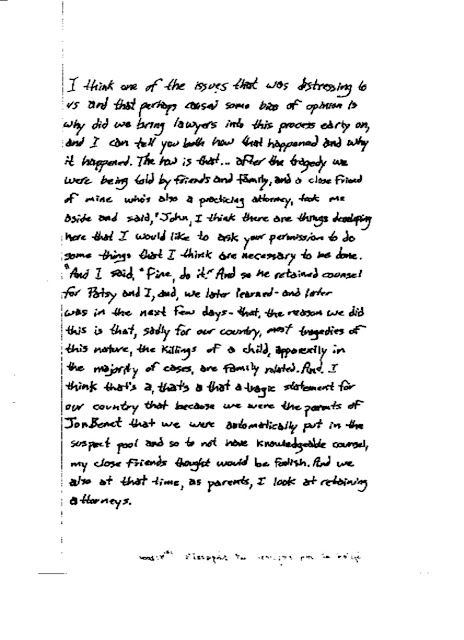 The text is from a statement John presented at the Ramsey's first press conference held in early May, 1997. Where Jameson could have gotten hold of it I have no idea. Copies might possibly have been released to the press during the conference. I'm not completely sure this is actually John's handwriting, as it's conceivable it could have been written by a secretary. It was not written by Patsy, I feel sure of that. Patsy tends to displace the dots on her i's well to the right, and there's no sign of that here. Looking closely at the smoothed out copy, I couldn't help but notice some striking similarities with the notorious ransom note. And I managed to put together the following comparison, presented here for whatever it may be worth:

Most of this speaks for itself, but a certain amount of commentary is warranted. The "John" in the press conference statement is strikingly similar to the three "John"s from the "ransom" note. That came as something of a shock, as I didn't expect to find anything that remarkably similar. There are other points of similarity worth noting. Note how the t's and h's are connected in the word "that." Note the strong similarities between the "d"s in "and," especially the little squiggles at the top. Note also the way both "John" and the note writer form the letter "f" when it appears at the beginning of a word.  In both cases we find both manuscript and block lettering, and there are strong resemblances between both types of initial "f" in both documents. I compared the "earlier" from the note with "John's" "early" mainly because of the striking similarity of the two letter "a"s, which look almost like "d"s.

It seems highly likely to me that this is a genuine example of John's writing and if so that would make it only the second example of John's writing that's ever been released to the public -- while a great many examples from Patsy have been widely disseminated, analyzed and discussed. [Turns out I was wrong. See here for details.] However, I must reiterate what I wrote when discussing John's court document: I'm not claiming these comparisons in themselves "prove" John wrote the note, which imo can never be proven through the analysis of handwriting alone; my purpose is to demonstrate how easy it is to find similarities of this sort when one goes looking for them. For all I know this could have been written by a secretary, but even if that's the case, the moral of the story remains the same. If you feel safe in assuming Patsy must have written the note simply on the basis of some similarities found by a few hand picked "experts," then take a look at what I was able to find in the document presented above -- and think again.

[Added 10-17-12: I wrote to Jameson regarding this document and received her response a few days ago:


That is NOT a sample of John's handwriting as far as I know. The sample I have was a note to me and is on large index cards.

I think this is a copy of a page from their book and is a handwriting sample done for me, witnessed by me, by someone hoping to prove they wrote the note. Can't swear this is it without searching through files I have in storage, but know for sure it isn't what I have for John's samples..

I wrote her again for clarification, as I'm not sure what she meant by "someone hoping to prove they wrote the note." I'd sure like to know who that "someone" is. And why Jameson wasn't impressed enough to follow up. Unless she did. So far, I've had no further response from her, but I'm hoping to learn more soon]

I heard again from Jameson, and this document was definitely not penned by John. For details see my latest blog post, here.
Posted by DocG at 3:23 PM