Tom Miller, a criminal defense attorney and "court-certified document examiner" based in Denver, has a long history with this case. He was apparently the source for the various exemplars provided to Darnay Hoffman's team of "experts," and joined that team in matching Patsy's exemplars with those in the "ransom"note. He eventually wrote an indignant book about the case, JonBenet Ramsey: Prostitution of Justice.

The quality of his work as a document examiner is evident from the report he provided to Darnay Hoffman. Here are some examples:

Shape is one of the more easily identified categories of handwriting, comparison to the untrained eye. In this examination, shape provides numerous examples of Patsy Ramsey's handwriting in the ransom note. Take, for example, the "R" in Ramsey in the salutation of the note. The note's horizontal loop at the top of the "R" begins with an overhang to the left of the down stroke that forms the vertical stroke at the left. This same overhang is found in E-6 in the second "Ramsey." A similar type overhang occurs on page three of the note in the letters "D" where the note states, "Don't try to . . . " and in "Don't under estimate . . ."

In other words, the fact that the "Ramsey" in the salutation of the ransom note contains an overhang to the upper left of the "R" and also two more overhangs on the letter "D" -- and a similar overhang appears in the following "document," on the barely visible, tiny "Ramsey" at the lower right, is seen as a significant piece of evidence linking Patsy to the note. 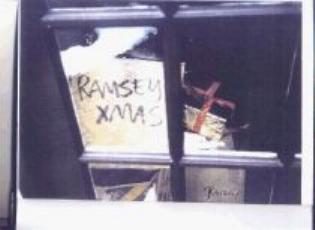 I wonder if Miller's copy was any clearer than this one. Maybe it was, but excuse me for wondering, first, whether there is any evidence either of these "Ramseys" was actually produced by Patsy (Miller says nothing about any attempt to authenticate any of these exemplars), and second, how such a commonly occurring mark as an overhang on a capital "R" can mean anything at all in a comparison such as this. (The larger "R" has none. And we see two such overhangs in the court document attributed to John -- which of course Miller has no interest in -- his object is Patsy.) Miller has nothing to say about the shape of the rest of this word, or the shape of the letters in the much larger "Ramsey" above it, with the sole exception of the letter "S," which he finds similar to a capital "S" elsewhere in the ransom note -- a classic case of cherry picking, since the "s"s in the word "Ramsey" are very different. Presumably any differences can be attributed to "deception," so only similarities count, regardless of where they are found.

With respect to this "S" he writes: "Here, the established habit of a non-curved initiation of the "S" which is then slightly retraced as it moves downward to complete the lower curve and the completion of the letter is obvious." Sorry, Tom, but if you want to establish the existence of an "established habit" you actually have to establish it -- by demonstrating multiple recurrences in fully authenticated documents written by the same hand.

Miller's following paragraph is a masterpiece of presumption, confusion and obfuscation:


The effort to disguise the writing and the failure to do so occurs in the upper case "W" at the beginning of the QD in the word "We" in the sentence "We are a group of individuals . . . " when compared to E- 1 in the upper case "W" in the word "Wednesday." In Patsy Ramsey's strong hand, the first cup of the "W" is squeezed and appears much narrower than in the second cup. In the QD, the opposite occurs as the second cup is squeezed and is thus narrower than the first. This opposite squeezing of the cups occurs as the opposite hand reverses a tendency of the strong hand much like a person making a check mark with the strong hand will reverse that same mark if made with the opposite hand. It creates a mirroring, or a reversal, of the direction of the checkmark. It represents a failure of the writer to recognize her own handwriting characteristics and to avoid those characteristics while using the opposite hand.

Where to begin? Well, first of all, Miller is already, on the basis of no analysis whatsoever, presuming the ransom note is written with the "opposite hand," which would, in Patsy's case, be the left hand. So when he refers, in the fourth line, to Patsy's "strong hand," he is referring to her right hand, and the "W" in question is from the "Wednesday" on the upper right in the letter to Miss Kit: 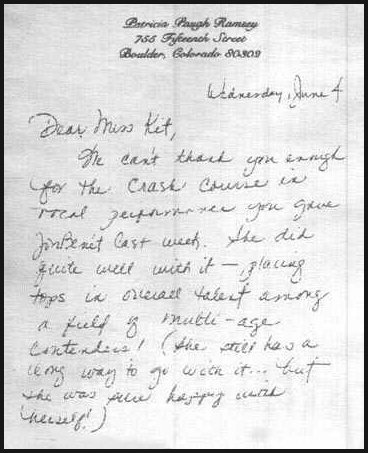 He is comparing this letter to the "W" in "We are a group of individuals" from the first page of the ransom note:

Get it? This entire paragraph is about the fact that "the first cup of [Patsy's] 'W' is squeezed and appears much narrower than in the second cup," while, "In the QD, the opposite occurs as the second cup is squeezed and is thus narrower than the first. This opposite squeezing of the cups occurs as the opposite hand reverses a tendency of the strong hand . . ."

What, you may ask, is his point? Well, if you assume the note is written with the left hand (which he makes no effort to determine, but which might actually be the case), and Patsy's letter was written with the right hand; and if you assume Patsy wrote both documents (which is, of course, what Miller is trying to establish), then it makes sense to understand the reversal in the relative size of these two "cups" as due to her reversal of hands. But this makes sense only if we already presume ahead of time that Patsy wrote both documents.

It tells us nothing whatever about whether that is actually the case, it only offers a theory regarding how certain spacings can get reversed when the opposite hand is used. Miller makes no effort to claim the two letters actually look alike, which obviously they don't. However, someone reading that paragraph casually and without much effort at critical thinking might get the impression that his observations regarding these two very different exemplars are actually telling us something of relevance. Clearly they are not.

The following paragraph merely enumerates various instances of similar tendencies, found in both Patsy's exemplars and the note, to squeeze one or the other "cups" of the letter "w."  Again, such observations are meaningful only if we already know ahead of time that Patsy wrote both the exemplars and the note. If it tells us anything more than that, Miller doesn't say.

To his credit, Miller adds the following to the end of his report:


This opinion represents an analysis based upon exemplars believed to be in the hand of Patsy Ramsey. It should be noted that the taking of verified exemplars from Patsy Ramsey was not available to the examiner. It is highly recommended that additional exemplars be provided or located and that access to the original Questioned Document be provided in order to more firmly establish the conclusions of this Questioned Document Analysis.

This is at  least honest. But these very real and very serious limitations did not prevent Miller from nevertheless offering the opinion that Patsy Ramsey wrote the "ransom" note. Quod Erat Demonstrandum,  no doubt.
Posted by DocG at 3:32 PM