The Scene at the Window

The scene at the basement window has been the focus of much speculation and dispute, centering on the question of whether or not there was any sign of a forced break-in at that point. As has been demonstrated repeatedly, most recently in Kolar's book, the condition of the grate, the well, and the sill is clearly inconsistent with such a possibility. In the words of DA Alex Hunter, "No one passed through that window." What's rarely if ever discussed, however, is another aspect of the window scene that, for me, is of even greater significance. Let's consider the various pieces of evidence at and around that window.

First the broken pane, revealed to the public for the first time in association with the publication of Kolar's book. Here's a still from the video released via The Daily Beast: 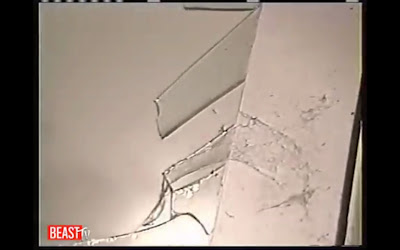 Note the wisp of cobweb in the lower portion of the photo. Another, even wispier fragment can be seen in another portion of the same video. Don't let these fragments fool you. Spiders don't weave bits and pieces, they weave complete webs. What we are seeing is the remainder of a web that was destroyed. And given the shattered glass, it should be clear that the web was destroyed when the glass was broken, suggesting the break might well have been fresh.

Second, a photo we've seen many times, ever since Lou Smit released it as part of his dog and pony show: 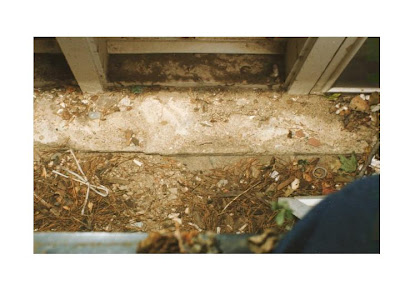 Note the heavy layer of dirt and dust on the sill (upper portion of the photo) which would have been seriously smudged if anyone had actually crawled through. Smit preferred not to call our attention to that little detail, highlighting instead the relative absence of debris on the ledge adjoining the sill (just below it in the photo). He was right, that portion of the ledge seems surprisingly clear. That's not consistent with a break-in, however, because someone stepping onto the ledge would not have swept it clean, but crushed whatever debris was on it. What this looks like to me is the result of someone on the inside opening the window, reaching out, and gathering the debris on the ledge, so he could then dump it on the basement floor. And sure enough, debris from the well, mostly packing peanuts, was found on the floor beneath the window. And, as Smit pointed out, some of these peanuts were found in the windowless room, next to the body.

Third, let's take yet another look at the famous Samsonite suitcase, found, according to John, flush against the wall (Fleet White moved it a bit before this photo was taken): 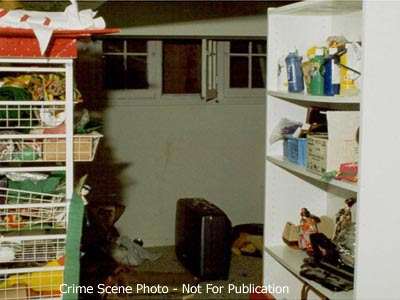 Fourth, here's another still from the Daily Beast video, showing a fairly good sized shard of glass on the window sill: 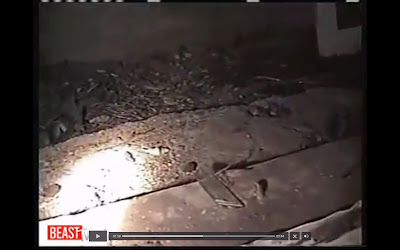 Kolar assumed it was there from the start. It wasn't. According to Fleet White, he picked a piece of glass off the floor and placed it on the sill. This must be it. [Added 9-8-12: Reading Kolar more carefully I now realize he was right. White reported finding the window closed, so he would have placed the glass he found on the very narrow inside sill. This glass was discovered sitting on the outside sill, so as Kolar alleges, it must have been sitting there all along.]

Finally, I'll call your attention to one more piece of evidence, but I can't show it to you because it wasn't there. Not most of it, anyhow. I'm referring to all the broken glass from the broken window pane. Only a few pieces were found on the floor. What about the rest?

So what is the point of all these bits and pieces of evidence? What do they tell us? First of all, they point strongly away from John's story about breaking in earlier (assuming we need any additional convincing on that score).  The fragments of web on the broken window are consistent with a fresh break but could conceivably have been caused by an old one. Not so the thick layer of dust and dirt on the sill. Clearly no one entered the window the previous night, because we'd see clear signs of smudging and displacement. But if John had climbed in the previous summer, as he claimed, we'd see signs of that as well. We see no such thing. The layer of dust is clearly defined and totally undisturbed. Even if that particular layer had formed over the last six months, you can be sure there'd have been another layer beneath it and that layer would be smudged. No such layer is visible. No one went through that window the night of the crime and no one went through that window ever.

That's not all. Far from it. Let's return to the window ledge swept clean of debris and the debris reportedly found both on the floor and near the body. If no one went through that window, then why is that patch of debris missing from the ledge and how did those packing peanuts get on the floor? If no intruder passed through that window, we can only conclude that the debris was gathered from the ledge and dropped on the floor to make it look like an intruder had been there, i.e., to stage an intruder break-in.

Are there other signs of staging? Well, if no intruder was present, then how did the suitcase get where it was found? And if the glass had been broken six months ago, then how did that shard wind up on top of it? If Patsy had cleaned up the floor as thoroughly as she'd claimed then how could she have missed the large chunk of glass placed on the window sill by Fleet White? Even more to the point, if John hadn't broken in previously, then how, and when, did that window pane get shattered?

Looks to me like someone used the suitcase to boost himself up, pulled the window toward him, grabbed a bat or flashlight or golf club, whatever, and took a swing at the outer surface, so the broken glass would fall inward, onto the basement floor. The shard of glass could have fallen on the suitcase at that time.

What all this tells me is that the window scene was staged. Had to be. There is no other explanation for the evidence presented above. And once we see this, then we cannot help but realize that the staging was incomplete. There was a broken window, which would have enabled an intruder to reach the latch (just barely) and let himself in. There was packing debris on the floor, consistent with an intruder blustering through the window well. But too much was missing. To complete the job it would have been necessary to open the window wide, squeeze through it and into the well, mess things up as much as possible and then, finally, lift the grate open, probably using the same bat or golf club used to break the window, and displace it, just as an intruder entering from above would have done.

Clearly John ran out of time. No matter. If all had gone as planned, he'd have had an entire day and night with the house to himself, and could easily have completed the job. But Patsy destroyed his plan by the simple act of dialing 911, calling in the police with the body still in the house and the staging incomplete. With his efforts at the basement window hopelessly compromised, John had no other recourse than run down to the basement for some quick reconstruction work, mainly cleaning up most (but not all) of the broken glass, which enabled him later to claim he himself had broken in earlier. That explained the broken window, which would otherwise have been seen as staging for sure. But it didn't explain all the other evidence of staging, apparently missed by the investigators, thrown into a state of confusion by John's "confession." Now why would he go and claim he himself had broken that window if he'd been busy staging? Why indeed?