"Master Detective" Lou Smit is known for a Powerpoint presentation in which he claimed to refute certain evidence collected by the police, and presented what he regarded as strong evidence for the intruder theory. I found some serious holes in Smit's presentation, and reported my findings on Jameson's Webbsleuths Forum. Here are some excerpts:

The photos displayed, entitled "The Sidewalk and Surrounding Area," [purporting to demonstrate that police reports of "no footprints" were misleadeing] are an excellent example of the way in which Smit tosses all objectivity aside, bending the evidence to the advantage of his "clients." The police arrived at 6AM, well before sunrise. The photos shown were obviously taken in clear sunlight. The police report emphasized the presence of frost, not just snow, on the ground. If any frost had survived after sunrise, it would probably not show up in such photos anyhow. Thus the photos are completely irrelevant. Yet Smit, referring only to snow and NOT frost, presents them as evidence of police incompetence and/or bias. Smit himself was not at the scene at that time and had only photographs to work by. Yet he questions the observations of an experienced policeman at the scene that morning.

reveals an undisturbed, thick layer of grime across the entire length of the central window sill. Yet Smit ignores this evidence, which clearly demonstrates that no one could possibly have passed through that window. He directs our attention instead to the window well beside it, a good portion of which is relatively free of debris. The condition of the well means nothing if no one actually passed through the window itself, but Smit ignores this inconvenient fact. Moreover the absence of debris in the well is NOT in fact consistent with an intruder's presence since such a person would have crushed the debris in the well rather than move it to the side. Again Smit shows a photo which has no bearing at all on his argument, ignoring, moreover, evidence in the same photo which contradicts that argument.

[Here's a close-up of the central portion of the above photo. Note the considerable amount of undisturbed debris on the window sill]: 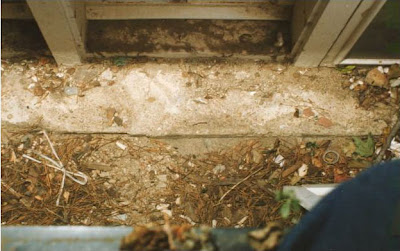 [And here's a picture of Smit squeezing through that tight space]: 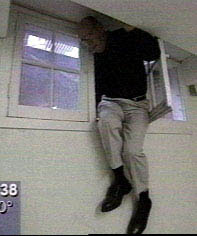 From the report of Smit's presentation: "Grate over foliage: A grate over the window well appears to have been moved, leaving green foliage caught under its edge."

From the Police interrogation of John:

"LOU SMIT: And I don't want to mislead you. Because, obviously all of us have seen that. And at first we didn't know exactly why that was. But we think a perhaps an officer may have moved that grate. So I just wanted you to know that. Because it's very easy to make the conclusion that it was done. But we have had some real discussion on this and did find out that an officer had moved that grate. I usually don't tell you whether we know about that. But otherwise that's misleading."

At the time of this presentation, Smit had no way of knowing that his interrogation of John would ever be released to the public. If it had never been released then the full extent of his duplicity would have remained a secret.

Smit's attempt to concoct a stun gun scenario is highly misleading. There was NO evidence of any kind that a stun gun was used in this crime. Smit simply found some photos showing marks on JonBenet's body and then went shopping until he found a type of stun gun with measurements that, very roughly, seemed to fit. Again, he was working exclusively from photos, not the body itself, so his stun gun theory is extremely speculative, to say the least. If a stun gun with those exact measurements had been found discarded at or near the crime scene, then Smit's theory would have to be taken seriously. In the absence of such evidence the stun gun theory is pure speculation with no clear bearing on the case.

From the report of Smit's presentation: "The butler door: A police report noted that a Ramsey friend who arrived at the home shortly after 6 a.m., one of the first people there, said a door on the first floor -- called the butler door -- was ajar. Smit believes it's possible the door was an escape route for the intruder."

Smit's butler door story, which gave rise to a major "urban myth" on the internet, is particularly disturbing, as once again he is very clearly stretching the truth to suit his "clients." Here's a more complete picture from reporter and insider Frank Coffman, known on the forums as "Masked Man." Coffman is by no means a member of the BORG persuasion, and has enthusiastically defended both Ramseys. Hopefully this will put that particular urban myth to rest forever:


There was NO open door at the Ramseys' house on the morning of Dec. 26, 1996. John Ramsey himself found all the doors closed and locked that morning. Here are the FACTS:

* According to John Ramsey, ALL the doors were LOCKED. John Ramsey told the police that "I looked around the house that morning and... and all the doors were locked and I checked every door on the first floor... and they appeared to be locked." (Thomas, p. 172)

* Sgt. Paul Reichenbach checked all the doors at the Ramsey house in the early morning of Dec. 26, 1996. He found no open doors and no signs of a break-in.

* In June 2001, Linda Arndt testified at her civil trial that there were no signs of a break-in or other identifiable points of entry for an intruder into the Ramsey home.

* Patsy Ramsey told a guest at the memorial service on Dec. 29, 1996 that all the doors were closed and locked.

* Police chief Mark Beckner told me that the northside door (the so-called "butler's pantry door") was opened by a crime scene technician early that morining. The police technicians went to work at the Ramsey house by 6:50 a.m. on Dec. 26, 1996.

* Lou Smit himself told me a few months ago that he agreed that the "butler's pantry door" was probably left open by a police technician, just as Beckner said.

I have to admit: at one time, I was taken in by the myth of the "open door" because it was reported in a newspaper story and it was touted by others. Since then, I have learned that there were no open or unlocked doors. Neither the police nor John Ramsey found any open doors. The mistaken notion about an "open door" got started after John Fernie noticed that the northside "butler's pantry door" was ajar. Fernie didn't know that the door was left open by a police technician." ( From a Websleuths post by Masked Man dated August 20, 2001)