John and Patsy Opposite Hand Samples 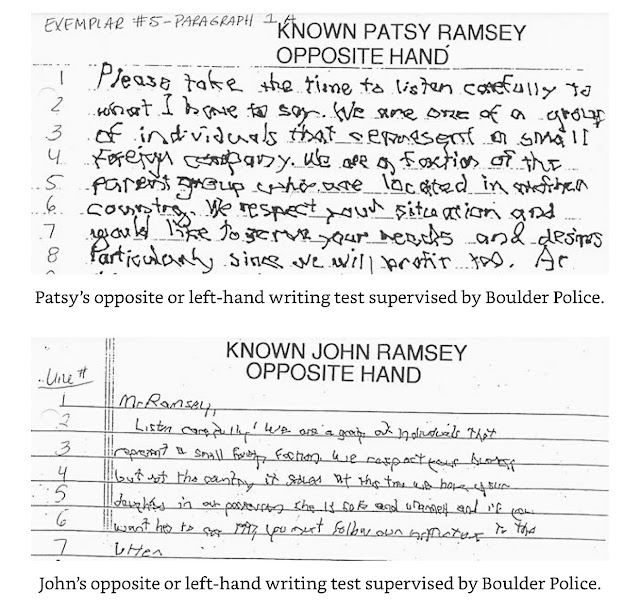 And here's a sample from the ransom note that Castor has snipped for comparison purposes: 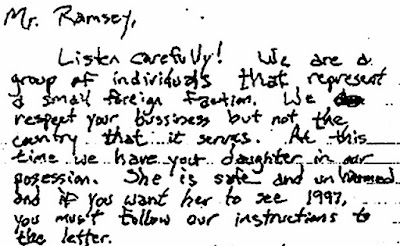 I've already analyzed Patsy's left hand sample in some detail here. None of the samples John had provided to the authorities had ever been made public until Paula Woodward's book came out. The sample Castor has provided looks as though it's a reproduction from that book. I noticed that when I reviewed her book some time ago, but couldn't make much of it so never posted anything on it. One thing it tells us is that John is a lot better at writing with his left hand than Patsy is, though both samples are pretty messy. Oddly, while Patsy was apparently given a Sharpie pen to write with, the pen John was using seems to have a thinner point. Wonder how that happened.

Anyhow, this is everyone's chance to chime in with their own analyses of these documents. As I see it, the note was NOT written with the opposite hand and for this reason I'm still waiting to see more of John's right handed exemplars. Though oddly, the document we've all seen uses a backhand style more consistent with what we'd expect from a lefty.
Posted by DocG at 4:02 PM