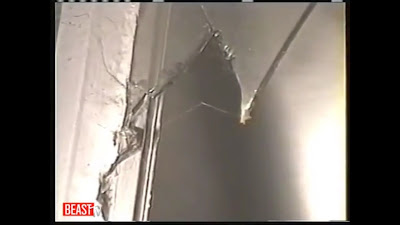 Notice how dark the edge so clearly visible on the right appears to be. According to Hercule this dark shading represents the accumulation of dust and dirt that would have built up after the five or six months that elapsed since John broke the window, which proves he was telling the truth.

First I want to thank him, because photographic evidence can be very useful, especially in settling a dispute such as this. Seeing is believing, no? A photo can also be deceptive, however. As I explained in my previous post, we can safely infer that the forensics people found all these edges to be clean for a very simple reason. If they'd been encrusted with dirt and/or dust that would be a sure sign the break was old, as Hercule has alleged -- but if that were the case then Kolar, when asked if those edges had ever been studied for signs of aging, would not have replied that there was "no way to determine when the window was broken." Since the observation of a buildup of dust and dirt certainly would have determined that the break was old, that's what Kolar would have reported.

By stating that there was no way to determine when the window was broken he is indirectly telling us that those edges must have been clean -- and that the investigators must have been at a loss as to how to interpret that. Dirty edges = an old break for sure; clean edges = either a fresh break, or an old break on which for some reason no dust or dirt had accumulated. That's how I interpret Kolar's response, in any case.

Moreover, my suspicions are reinforced rather decisively by the actions of the people who conducted the police interviews, who would not have bothered to question both Patsy and John about his window story at such length in both 1997 and 1998 -- and would have had no reason at all to ask them if that window had ever been repaired -- if the edges had been encrusted with months worth of dust and dirt. Telling us, once again, that the edges must have been clean.

Now Hercule presents us with what he regards as decisive evidence of dust and/or dirt on those edges, as seen from the above photo. As I interpreted it initially, however, what looks like a dark layer of dirt on the edge of that upper right diagonal could also be a shadow, or reflection. And after further study I discovered another clue that strongly supports my original interpretation. I'm wondering if anyone here can spot it.
Posted by DocG at 11:13 PM