Ah the joys of cherry picking. The National Enquirer obviously wanted in on the Patsy Ramsey bandwagon (before they were threatened with a lawsuit, that is, after which they changed their tune completely). So they decided to publish a (partial) copy of the ransom note alongside a (partial) copy of Patsy's left-hand sample, with a headline blaring the dramatic news: Patsy's sample was "AN EXACT MATCH"!

Patsy's left-hand sample convinced a great many people she had to have written the note. Wasn't it obvious? For example, back in 2009, a thread appeared on the Topix website entitled: Patsy's Lefthanded Writing Sample -- Doubt Removed. In the initial post, someone with the nickname "Cyber" wrote as follows:


At the back of the paperback version of The Police Files, compiled by the Enquirer, are several of Patsy Ramsey's writing samples along with the Ransom Note.
After having contributed a few samples during 1997 Patsy was asked again to give a sample. She didn't know until she sat down that LE wanted this sample to be left-handed (her non-dominant hand). Take a look at this one in comparison to the Ransom Note. If this sample isn't a dead ringer for the Note I don't know what is.

Is it really such a dead ringer? Let's take a closer look. I've already provided an analysis, here, of the four words selected by the Enquirer as perfect examples of how Patsy's hand matches that of the note: "carefully," "that," "faction," and "letter" (see the inserted blow-ups above). Here's a sample of what I wrote:


Taking the first comparison, on the word "carefully," the "a"s are obviously very different, so are the "r"s. The "e"s are very different also. The top of the ransom note "f" is rounded while Patsy's is horizontal. Her "u" is a bit lumpy, while the "u" in the note is not. The "l"s in the note touch one another, but Patsy's are parallel. The angle of the lower part of the "y" is clearly very different in both.

So. What, exactly is going on here? And why were these four words chosen over all the others? For a long time I wondered about those other words, but whenever I tried to compare them from the NE graphic, one word would blur into another and my mind would go numb. So, finally, today, I decided to roll up my sleeves and actually compare as many words as possible, side by side. This is what I came up with:

There it is, folks, for all the world to see, all the "obvious" similarities between Patsy's left-hand sample and the "ransom" note! (If you think I might be pulling the wool over your eyes, then by all means, check my exemplars with the NE graphic at the top of this page.) And sorry, but I see no resemblance whatsoever between any of these word pairs. They are in fact about as different as it's possible for them to be. (By the way, please forgive the printing inconsistencies in the right hand column. I started by copying from the tinted Enquirer graphic, but since the whole note wasn't included, I moved to a simple, black and white copy of the original.)

Now. Allow me to repeat myself: what is going on here?

Well, for one thing, the Enquirer obviously chose the four words in the blowup because they were the only words in Patsy's sample that weren't obviously different from the same words in the note. They are certainly NOT an "exact match," or even close, but they are also not so obviously and completely different than all the others. This is what is called: cherry picking. I.e., you look ONLY for what suits your purpose and make sure to ignore everything else.

As for Patsy's sample as a whole, we have to remember that it was written with the left hand, which forced Patsy to struggle a bit to form each letter, making this particular document much more sloppy than what we are used to seeing when she writes with her right hand. And since the "ransom" note was probably also written with the left hand, and is certainly far more sloppy, almost to the point of illegibility at times, than Patsy's usual writings (typically "female" in their neatness and clarity) then, when we glance at the left-hand sample as a whole, without attempting to compare specific words, then you might see a sort of very general, impressionistic resemblance to the note, yes. And if you are already convinced that Pasty wrote the note, then that will just jump out at you. But when we zero in on the details, as I finally decided to do, the obvious discrepancies are immediately apparent.

Now, let's take yet another look at two more comparisons, made by me some years ago: 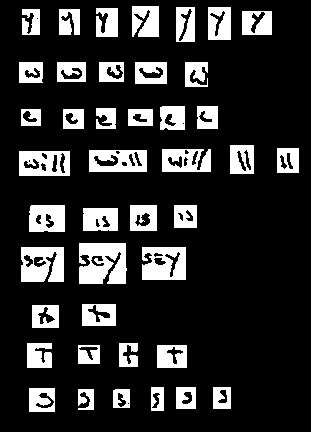 The first comparison speaks for itself. The second was compiled as a response to those who claim they can see no resemblance between John's hand and the note. So in this case I mixed them up, challenging the skeptics to sort them out. No one has ever been able to do so.

And yes, I know how it's become almost an article of faith for so many following this case that Patsy "obviously" wrote the ransom note. And when I point to the very clear shortcomings of the so-called "experts" who convinced themselves she wrote it, I'm told that doesn't matter, because it's so "obvious" to those who can see for themselves that Patsy's exemplars are so "exactly" like those from the note, why it simply hits you in the eye. Well, what hits me in the eye are the many resemblances with the document penned by John Ramsey. I see no convincing resemblances between Patsy's hand and the note.